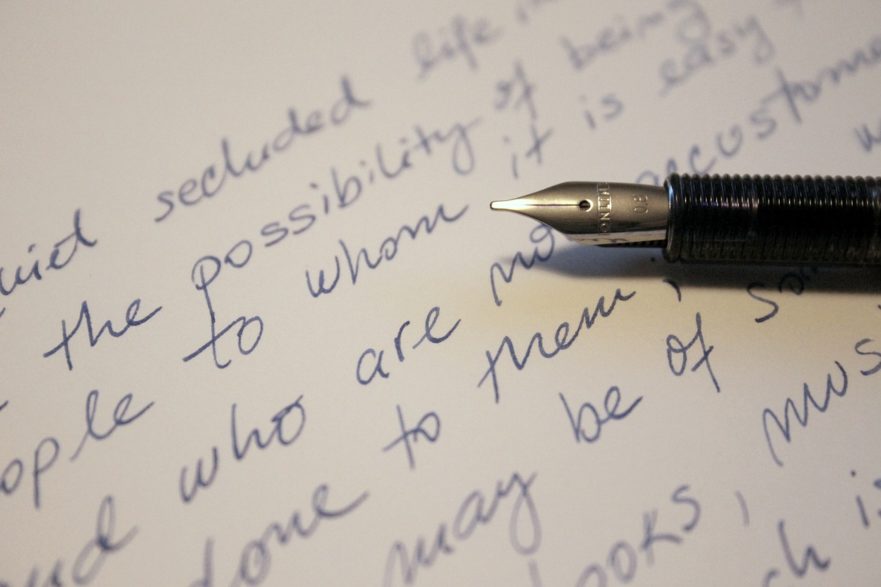 My nine-year old boy, Noah, has been working hard on his handwriting this week.

He fizzes with ideas when he writes, but most often his handwriting and his spelling simply cannot keep up. You can see the sheer physicality of his writing as shifts and squirms on his chair: each thought sparking a shuffle of stray arms and jittering legs.

Understandably, given he has spent more time working from home than in the classroom since March, he simply hasn’t practised writing as much as he would have done in school.

Though he has the privilege of technology to hand (his typing speed is pretty sharp), his writing stamina and his handwriting has slipped somewhat. He is not alone – OFSTED indicate a loss of writing skill and stamina was an issue when talking to schools.

Lots of research by psychologists builds a clear picture that handwriting matters a great deal to writing and learning. It is much more than neat presentation or the flourish of a signature.

Studies with young children have shown that when writing was composed by hand, children generated more words and more quickly, with more ideas, than when typing on a keyboard. Research also indicates that older students are more effective when they make notes by hand, than when they do so on their laptop.

Writing experts have also shown that handwriting is a crucial foundation for writing success. The ‘Writer Effect’ reveals that unless handwriting is fluent and automatic, it interferes with the act of skilled writing. For Noah, along with many pupils, handwriting effort can take up too much mental bandwidth. As a result, spelling slips, punctuation goes awry, and meaning making is compromised.

Put simply, the better your handwriting – and the more automatic – the more you can focus your mental energy on picking the right words, playing with sentence structures, and much more.

The notion of just ignoring handwriting legibility and going the easy route could actually inhibit more effective methods of writing and learning.

Not only is writing foundational for skilled writing, there is a real ‘Presentation effect’ too. That is to say, the judgements of teachers, and pupils, are influenced by legible handwriting and correct spelling. Potentially, two equally effective pieces of writing could be judged differently by a teacher or an examiner.

What is the impact of the pandemic on writing?

There is so much we don’t yet know about the impact of partial schooling, lockdown, and the interruptions to the lives and learning of pupils.

Of course, helping with handwriting feels rather insignificant when considering the well-being of our children. And yet, I want Noah, along with every other pupil, to be happy and healthy first, but also flourish in the classroom too – now and in the future.

Back in the autumn, when comparing the writing attainment of large national cohorts, No More Marking found that groups in years 5 and 7 seemed to have gone backwards in their writing attainment compared to the previous year. Though we cannot attribute this dip to the partial lockdowns with exactness, lots of teachers from around the country have described a similar loss of writing stamina – and quality – from their pupils. It is likely recoverable with skilled instruction and support.

Speed and legibility of handwriting may both matter for our pupils writing success. Post-pandemic, they may require close attention.We should explore the problem with care. Handy teacher-friendly resources, like the ‘Handwriting Legibility Scale’, offer a useful diagnostic tool to take a closer look at handwriting.

With Noah, small supports will help. For a start, he could do with sitting with a little more of a still posture (we talk repeatedly about ‘his base’ – i.e. the not-so-simple act of having his feet on the ground!), and there is lots to do still with his spelling and sentence construction. But with some concerted focus and support, and practice, I am sure his handwriting will recover and his writing will begin to reap the benefits.

We can be confident that handwriting instruction will make a big difference to pupils who need it. Perhaps then we needn’t worry too much right now, but for many pupils, we should pay close attention to their handwriting, because it will matter to their future school success.

There is consistent evidence now of the crucial role of turn-taking and early vocabulary development. Rich early language is so crucial.