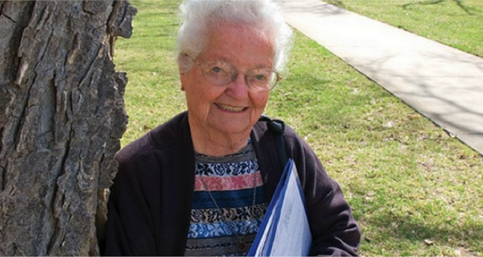 What does this lovely old lady reveal positive messages about student success? Why is her story potentially so powerful?

Nola Ochs is a special lady. So special she appears in the Guinness Book of Records. Back in 2007, Nola Ochs became the world’s oldest college graduate when she graduated from Fort Hays State University at the young age of 97. She graduated at the same ceremony as her granddaughter! Not only that, she grabbed her Masters degree at 98 and wrote her first book at 100!

Nola’s story is one I enjoy telling students. I told it this year in some assemblies. Her commitment, courage and resilience are no doubt desirable character traits. She embodies the common mantra ‘use it or lose it’ when it comes to brain plasticity – that is to say, our capacity to rearrange neural pathways and learn new things. This brain plasticity of course varies with age, but the story of Nola Ochs exemplifies the tremendous capacity of the brain. Every child can know that their intelligence isn’t fixed.

Now, for a few years Carole Dweck’s growth mindset concept had gone down a storm in schools across the globe. Like any popular idea, it can appear in schools as little more than a glossy assembly and a few headline events, having no impact on our students, or even, perversely, having a damaging effect. The problem with growth mindset interventions is a problem for any psychological intervention. It is so easy to get it wrong when the complexity of young people, personality and psychology are involved.

In a research study by David Yeager and Gregory Walton, appropriately named ‘Social-Psychological Interventions in Education : They’re Not Magic‘, they indicate that such interventions need to be ‘stealthy’ and that students shouldn’t be told they are undergoing an ‘intervention’ with the aim of improving their performance. They are also stealthy because they are brief. The effects, subtle and hard to track, may outweigh long-term, significant approaches to growth mindset interventions and the like.

I have written before that I think that students understanding about a ‘growth’ and ‘fixed mindset’ has value and there is a series of important messages about intelligence that are helpful to create a successful climate for effort and great learning. Perhaps, though, we need to introduce the concept, then quickly aim for much greater subtly in our approach. Tell the story about Nola indeed. Tell other great stories. They may have a butterfly effect beyond the few minutes it takes in the telling, but they likely won’t prove magical. When we do tell these stories we needn’t bash students over the head with the language of ‘growth mindset’, or GRIT or ‘character’.

If we don’t do this then we risk quickly inspiring little more than boredom and resistance – and that is just the teachers!

Our growth mindset messages can be telling stories like that of Nola Ochs, without ever mentioning Nola possessing growth mindset, or GRIT, or ‘character’, or whatever else is the favored term for our approach to social-psychological interventions.

All of a sudden, the concept made perfect sense. Excitedly, he shared the post for others to read. Before long, the fuss subsided. Decidedly unimpressed, the children just got on with it. https://twitter.com/HuntingEnglish/status/1351221431296733193