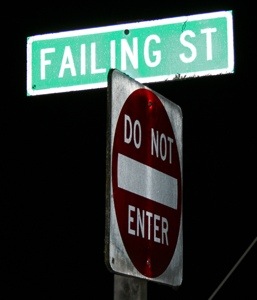 So often this year I have encountered students crippled with a fear of failure. At this time of year, with exams looming, that crisis of confidence can erupt – flattening a student with terrific force. In schools we can use the resilient language of the ‘growth mindset’, but for many students it never comes close to penetrating the hardened layers of protective shell that students have formed from an early age.

I also sense that despite our willing use of the language of the ‘growth mindset’ as teachers, we too often doubt that willing resilience will see us tackle failure confidently and that success will follow.

With these thoughts in mind I came across this speech by J K Rowling, given as a Harvard commencement address back in 2008, that eloquently articulates the benefits of failure:

“Ultimately, we all have to decide for ourselves what constitutes failure, but the world is quite eager to give you a set of criteria if you let it. So I think it fair to say that by any conventional measure, a mere seven years after my graduation day, I had failed on an epic scale. An exceptionally short-lived marriage had imploded, and I was jobless, a lone parent, and as poor as it is possible to be in modern Britain, without being homeless. The fears that my parents had had for me, and that I had had for myself, had both come to pass, and by every usual standard, I was the biggest failure I knew.

Now, I am not going to stand here and tell you that failure is fun. That period of my life was a dark one, and I had no idea that there was going to be what the press has since represented as a kind of fairy tale resolution. I had no idea then how far the tunnel extended, and for a long time, any light at the end of it was a hope rather than a reality.

So why do I talk about the benefits of failure? Simply because failure meant a stripping away of the inessential. I stopped pretending to myself that I was anything other than what I was, and began to direct all my energy into finishing the only work that mattered to me. Had I really succeeded at anything else, I might never have found the determination to succeed in the one arena I believed I truly belonged. I was set free, because my greatest fear had been realised, and I was still alive, and I still had a daughter whom I adored, and I had an old typewriter and a big idea. And so rock bottom became the solid foundation on which I rebuilt my life.

You might never fail on the scale I did, but some failure in life is inevitable. It is impossible to live without failing at something, unless you live so cautiously that you might as well not have lived at all – in which case, you fail by default.

Failure gave me an inner security that I had never attained by passing examinations. Failure taught me things about myself that I could have learned no other way. I discovered that I had a strong will, and more discipline than I had suspected; I also found out that I had friends whose value was truly above the price of rubies.

The knowledge that you have emerged wiser and stronger from setbacks means that you are, ever after, secure in your ability to survive. You will never truly know yourself, or the strength of your relationships, until both have been tested by adversity. Such knowledge is a true gift, for all that it is painfully won, and it has been worth more than any qualification I ever earned.”

In a testing fortnight personally, when I too had experienced failure, the speech resonated deeply. Also, if I were to look back on my teenage self I would see a boy terrified of failure.

The adversity and strength gained by overcoming failure has meant I am happy to tackle challenges I wouldn’t have thought possible as a student. Job interviews, public talks, public writing – all frighteningly public opportunities for failure, but all tackled with something like excitement and a healthy dose of fear. I need to keep communicating that to students. Don’t be afraid to fail. Aim to fail with confidence.

Coincidentally, J K Rowling gave this speech in Boston, not far away from Walden Pond, where Henry David Thoreau had written about living “deliberately” over a century and a half before. The parallels between the words of each famed writer about how we need to live are clear:

“I went to the woods because I wished to live deliberately, to front only the essential facts of life, and see if I could not learn what it had to teach, and not, when I came to die, discover that I had not lived. I did not wish to live what was not life, living is so dear; nor did I wish to practice resignation, unless it was quite necessary.”

Henry David Thoreau, ‘Walden or ‘Life in the Woods”

Over the coming weeks I am going to aim to remember to continue to attempt to fail with confidence and draw confidence from failure. I am going to try to communicate that message to my students. I have a suspicion it may lead to some success and that “inner security” described by J K Rowling.

NEW: EEF publishes addendum report which finds that a second cohort of children receiving Achievement for All made on average 2 months’ less progress in reading and maths than those who did not receive the programme.

Addendum report for our RCT of @AfA_Education is finally published!In brief, we find further robust evidence of negative effects (-2 months’ progress) of the intervention on children’s reading & maths scores: https://educationendowmentfoundation.org.uk/public/files/Addendum_Report.pdf

'Does reading *really* matter in mathematics?'