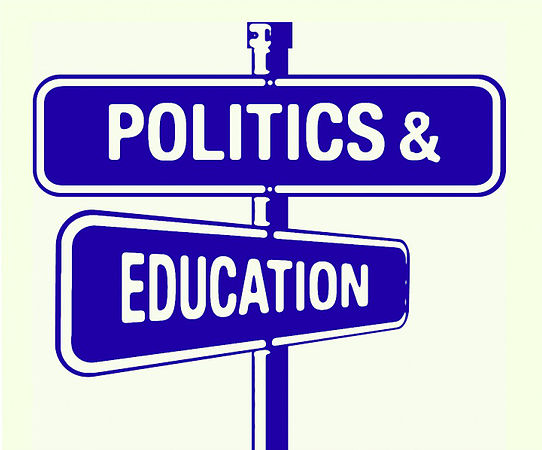 The run up to a general election often trots out the good, the bad, and the ugly, of education policy. We know that what sells to the voter on the doorstep often doesn’t translate well into the reality of a well-functioning school system; evidence & experience are often trumped by the demands of party ideology and swing voter special interests.

Show me the money.

A likely battle-ground for the 2017 General Election education debate will focus on school funding. The government line that school funding is at its highest ever level is one of those political ‘truths’ that has eel-like slipperiness. Yes, funding is technically at its highest level, but students numbers are also at an all-time high..and growing. As inflation hits the cost of daily items like text books, and older buildings wear and tear, a three billion pound shortfall beckons.

The Conservative government have committed, seemingly, to a new, improved national funding formula, but it won’t likely excite much interest on the doorstep. Once more, the national formula policy will likely get kicked into the long grass. You can expect the government to reiterate the line on “record funding” ad nauseam, without too much knowledge from the electorate of the failings of that claim. Labour will aim to make much of this, as indicated by Corbyn’s PM’s Questions performance. To an audience of school Headteachers, his commitment to fill in the 3 billion funding chasm was obviously welcomed, seeing him gain a standing ovation. Will the Lib Dems and the Conservatives look again at their prospective manifesto pledges?

What about some ideas? Well, targeted funding matters on the doorstep, as it can be presented in more concrete terms. Recently, in a large scale Education Endowment Foundation trial, ‘breakfast clubs’ were found to have significant positive benefits for young children. Although such universal, large scale policies are fraught with logistical issues for many smaller schools, with ring-fenced funding, this policy scaled nationally would likely win support on the doorstep and have a positive impact for children in schools. Jeremy Corbyn mooted the idea of an ‘Arts Premium’ back in September, which has obvious attractions on the doorstep too, for all of the right reasons (the Arts are surely a ‘right‘).

A new deal on school buildings.

Promises of new school buildings can prove a highly visible vote winner. It provides that concrete sense of action, where politicians can merrily cut through ribbons and celebrate shiny newness. Of course, it can provide stimulus for the building trade (though the evidence it provides significant impact upon students’ learning lacks solid foundations). That being said, the government cancelled the ‘Building Schools for the Future’ scheme back in 2010, but since, in 2016, Michael Gove has announced his regret at scrapping the scheme (to a room full of the architects he formerly criticised!).

The real policy winner for me, though less popular on the doorstep, for lack of knowledge, is to challenge the shocking PFI contracts many schools are locked into. Detailed in this TES article, Stella Creasey has already called for an inquiry and her suggestions could easily form a supported manifesto strategy. ‘More great buildings, more great schools‘ appeals as a strap line. Spelling out the awful contracts suffered by many schools would be useful on the stump.

If Corbyn’s claim that our students are “crammed in classrooms like sardines” is right, we may need a bigger boat.

This moves us nicely onto the perennial doorstep policy – reducing class sizes. Corbyn is in there early and the NUT are leading on the doorstep argument of class size reduction as it tends to gain more traction that more vague complaints about cuts. Now, I have written about this before (see here: ‘Class Size Matters, Stupid!‘). The evidence on reducing class size is not as positive as you would expect – see the EEF Toolkit HERE.

An important question to ask is “how big a class size reduction are we taking about?” Impact on student outcomes will likely correlate with the size of the reduction. If we are saying 32 to 25 students, then the difference may be negligible, but if we are proposing large changes – 30 to 15 say, that is likely a very different proposition. If we are talking big class size changes, then we are talking about a massive expense (not to mention magically creates many more teachers). I cannot see how this can or will happen, but class size is a concern of parents so the topic will no doubt be broached.

When it comes down to it, reducing class size is a proxy for school budget increases. Whilst school budgets worsen, class sizes will increase. Teacher workload will increase in proportion to class size. The negative impact on children and teachers is unknown, but ask a voter on the doorstep and I doubt anyone imagines it is a desirable state of affairs for their kids or anyone else.

Manifesto solutions? Expect little specifically in this area. It is high cost and unlikely. It comes back to a question of core funding and protections. At a Secondary level, a popular doorstep policy could be targeted funding linked to the provision of non-core subjects. If the next government wants to retain a world-class provision of the Arts, or unique technical subjects like Electronics, or community sports engagement, then funding could be matched to provision. By extension a well-funded and broad curriculum means an average of smaller class sizes.

Another canny approach, suggested by the EEF Toolkit, is to more creatively deploy teachers and Teaching Assistants (TAs), so that support for smaller groups is well-trained and targeted. We spend five billion on TAs alone, and yet, every penny would be well spent if they were deployed appropriately. As Dr Jonathan Sharples and the EEF have shown, politicians don’t need to look very far if they want to promote evidence-based programmes that work. Literacy, numeracy and student success all add up to good value on the doorstep.

If one aspect of education policy really needs to improve beyond seeming fag-packet-planning, it is the matter of teacher recruitment and retention. The latest announcement that University and school teacher training providers can offer 25% more teacher training places is very literally too late. Plans and places are largely arranged. Simply wishing lots more prospective teachers into post won’t help either. Teaching is not proving an attractive profession for far too many, whilst 18,000 are shipping overseas each year. We need to make the profession more intellectually attractive and more financially attractive. Simple.

When I started teaching I was offered a student loan repayment scheme that covered my entire loan over ten years. Dear reader, I stayed in the profession. Programmes like ‘Researchers in Schools‘ and bursaries up to 30k are commendable but costly. We also need more long-term strategies and financial incentives (in an area of growing student loan debt, this would appear salient). Politicians could devise tax deduction schemes and loan repayment plans just like the one that helped retain people like me in the profession. The starting salary of teachers simply isn’t keeping pace with comparable professions and as the flattening of pay means a real-term pay cut annually. Teaching simply isn’t attractive enough.

The solutions to recruitment link to pay schemes and salary, but a more long-term view is needed as well. Organisations are proposing regional, longer-term approaches to teacher training quotes and plans, that allow for more coherent planning. Spending more on advertising teaching alone, another recent announcement, simply will not work. The brain drain abroad, and out of the profession, will continue if working conditions aren’t improved. Cue guarantees around career-long professional development befitting a professional, alongside protections around workload and conditions etc. We come back, again, to requiring funding.

As we struggle to recruit and retain Head teachers (see this NFER report cleverly entitled ‘Keeping Your Head‘), we need to be creative with our ideas. Kieran Earley, a former UK Head teacher, now Principal of the British School at the Hague, has suggested we look at the international brain drain of school leaders and seek to reverse the trend with proper ‘re-entry’ training programmes and avenues that make returning easier: 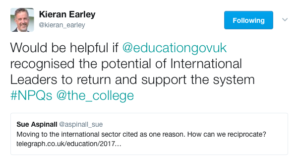 Interesting research from America indicates that easier certification for new teachers may give a short term fix, but that an ‘easy in model’, may result in a higher rate of people leaving the profession with an ‘easy out’. Though it won’t be a doorstep vote winner, the next government must get a hold of  recruitment and retention if we are to see sustainable school improvement in the next decade.

‘The Headteachers Roundtable‘, a think tank of sorts of school head teachers, have proposed a “doorstep manifesto” which orientates itself around the damage wrought by limited funding, whilst offering policy solutions that should interest political parties, with a focus on teacher recruitment and retention, class size and more. The school leader union, ASCL, led by Geoff Barton, have released their Manifesto HERE. The common overlaps are clear. Better teachers, better funding, leading to better learning for our children.

Yes, there is some money wasted in education, like every other profession, and area of human existence, but this does not preclude the next government from spending more wisely.

As a teacher and school leader for over a decade, I am healthily skeptical about manifesto promises. I fear that the debate over grammar schools will prove the biggest headline grabber during this campaign. Though the evidence stacks sky-high against grammar schools (see here: ‘Grammar Schools: More Evidence’) as vehicles of social mobility, they have had full commitment from the existing inhabitants of Number 10 whose re-election appears most likely by almost all accounts.

The question should be asked: who is clamouring for a return of ‘Secondary Modern’ schools? My personal objection rests on grammar schools proving a poverty of ambition. We should focus on the entirety of the the 25,000 state schools in our system. I’d ask, what is a grammar school a proxy for on the doorstep? Is it academic standards, a sense of traditionalism, an idea of opportunity for all?

I would much rather politicians pursued policies that were about academic standards and opportunities for every child, not just the few lucky enough the afford tutors and pre-prep schools. If we want a proper focus on social mobility and improving education, then Teach First have released their education policy manifesto: ‘Challenge the Impossible‘, which puts forward a stronger case than a gaggle of Grammar Schools. In the same vein, The Sutton Trust have released their ‘Mobility Manifesto 2017‘, with interesting suggestions, like the banning of unpaid internships and much more.

Rather provocatively, in an article for Schools Week, Becky Allen, Director of Edudatalab suggested: “Manifestos are never responsive to problems facing the sector. Instead, they are wish lists of things that don’t really need to be done.With this in mind, I think I’d prefer an education manifesto that commits politicians to doing precisely nothing for the next five years.”

She has an excellent point, but I suspect it may not prove an emotive vote winner on the doorstep!

So, finally, before you open any glossy party manifestos, if you want a concise summary of the educational landscape, then read this in the New Statesman by Laura McInerney: ‘Fewer teachers, more pupils and no more money. Schools are struggling‘. Nail, head is my response.

I've added new resources for my kids (upper KS2 - but adaptable) on the history of reading. It spans the birth of reading in ancient Sumer, to reading children's literature today. Use, adapt, share or ignore!