“A man with conviction is a hard man to change. Tell him you disagree and he turns away. Show him your facts or figures and he questions your sources. Appeal to logic and facts and he fails to see your point.”

Dorothy Martin was a charismatic leader with a unique skill. She could channel communications with extra-terrestial beings. Back in 1954, she headed a group of believers who were convinced that the final cataclysm of earth was going to happen and that their small, committed band would be the ones to be saved.

It is an not unfamiliar story. A group of adults, some college educated, left their jobs, places at university and their families to join this group. They were ardently convinced that on December 21st, 1954, that they would be transported to safety on a flying saucer.

Now, it doesn’t take a leap of logic to know how this ends. Whilst a crowd of reporters, onlookers and researchers observed the imminent ‘arrival’, the group prepared in their house for the midnight arrival. There was no arrival. The group were devastated, with Martin left tearful.

Of course, Martin miraculously managed to channel further communication from the planet ‘Clarion’ (in what must surely be termed a ‘clarion call’) that the God of Earth has called off the end of days. Each true believer was faced with cognitive dissonance. That is to say, we have a potent drive to hold onto our deeply held beliefs and we will reject any evidence to the contrary that destabilises us mentally and/or emotionally.

This is exemplified by the sad event from 1954. Instead of rejecting Martin and her failed prophecies, the group quickly adapted and found a narrative that could see them continue their beliefs. They received another message; they considered that the assembled crowd scared off the spaceman, who likely stood amongst them. In short, they reaffirmed their beliefs even more strongly, despite evidence to the contrary.

Leon Festinger, a researcher who observed Dorothy Martin and her band, used this story to establish his theory about cognitive dissonance and how, when faced with evidence, we do not necessarily shift our deeply held beliefs in his article: ‘When Prophecy Fails: A Social and Psychological Study of a Modern Group That Predicted the Destruction of the World’. Festinger theorised that five key conditions must be present if someone is to become a more fervent believer even after evidence disconfirms those beliefs:

You may consider Festinger’s work as deeply depressing. You are likely considering the many examples in your life, in politics and more, where alien landings are represented by something a little more ‘normal’.

Note some of the patterns with what you see in the media and even how you and I act in our chosen media: we band together with people who share beliefs like us; we scrutinise some evidence much more than others (we challenge the evidence that jars with our beliefs of course – it is labelled ‘selective scepticism’); we spurn ‘experts’ ; we share our opinions and enter echo chambers of similar voices; we scorn bias in others, but then fail to recognise that we are acting in the same blinkered way ourselves.

Though a little depressing, knowing that people who have their beliefs challenged with evidence and facts do not change their beliefs; instead, they confirm them even more strongly, is powerful knowledge (it has been helpfully termed the ‘Backfire Effect’). It is powerful because the first step in reducing our biases is recognising that we possess them as other do. It saves us time. That next online argument you leap into for a minute or two, but lasts an hour, can be time saved, with the knowledge that you will seldom change people’s minds or their beliefs. You will likely get more done. 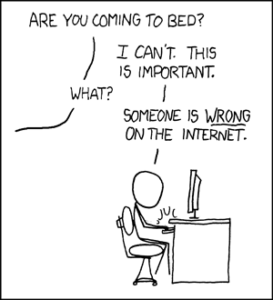 Safe with all of this knowledge you may think that the Dorothy Martin’s of the world get their comeuppance. Their falsehoods are exposed and they are discredited. Well, Martin went onto  initiate a new order under an alias of Sister Thedra until her death in 1992. Apparently, her new order is continuing to this day.

I offer no simple solutions. I do think that the next time you leap into a debate online, or you dare to dive ‘below the line’ on a controversial internet topic, consider this video and think what evidence are we missing, or refusing to countenance:

And for a final word:

“True ignorance is not the absence of knowledge, but the refusal to acquire it.”