Nothing prepares you to be a parent. Nothing. No parenting class gives you every answer to the mystery, particularly in the haze of a sleep-deprived dawn. No crying doll can ever captures the searing pain of your babe crying in your arms. Still, if we gave the teen girls we care for some sense of the demands of being a young mother, perhaps it would help them steer clear of becoming a parent unprepared.

This common-sense notion has led to decades of programmes that have used pre-programmed dolls as part of a concerted plan to reduce unplanned teen pregnancies. The notion of scaring ’em straight and away from any idle notion of being a parent may not be all it is cracked up to be though.

A significant new scientific Randmised Control Trial (RCT) in The Lancet has revealed a counterintuitive case that being a virtual parent actually made it more likely that these Australian teens would become a teen parent – see here: “Efficacy of infant simulator programmes to prevent teenage pregnancy: a school-based cluster randomised controlled trial in Western Australia‘. The research made a big media splash, with the Lead Investigator involved, Dr Sally Brinkman sagely highlighting that most well-intentioned programs can have “unexpected consequences”.

This discovery about the unexpected consequences of widely conducted programmes reminded me of the failure of the large-scale American programme, ‘Scared Straight‘. In his book, ‘Black Box Thinking: Marginal Gains and the Secrets of High Performance‘, Matthew Syed expertly describes the very expensive failure of this programme (you can read about the evidence HERE). Put simply, it takes teens in danger of criminal wrong-doing, to prison to be confronted by real-life convicted criminals. The ‘scaring ’em straight’ approach looks like this:

As Syed showed, RCT evidence strongly disproved the early positive signs that emerged from the heralded programme. The common-sense notion that meeting hardened criminals would exercise all wishes for a life of crime for many was proven wholly wrong. The opposite was true.

“Many areas of government have not been tested in any form whatsoever. They are based on hunch, gut feel and narrative. The same is true of many areas outside government. We are effectively flying blind, without much of a clue as to what really works, and what doesn’t. It is actually quite scary.”

I’m sure we can happily give the government a kicking in this regard, but in all honesty, we could shine this spotlight on schools and reveal a similar story. The undertaking of a randomized controlled trial helped override the biases that have seen programmes like the virtual doll approach and ‘Scared Straight‘ continue on the basis of anecdote and much invested effort. Such an approach in education is shown to be viable by the work of the Education Endowment Foundation and by the ‘Closing the Gap: Test and Learn‘ project, but it is also doable within schools with some planning. 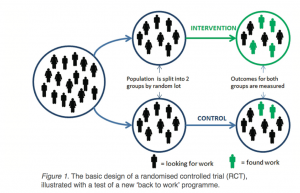 What if we substituted ‘Scared Straight‘ and virtual parenting programmes with our approaches in school with regard to homework, sex education programmes, or heralded whole school behaviour management approaches? We could start small and learn fast with our own pilot programmes, or consistently engage in wider research projects.

Too often in schools, we are awash with data but we are short of good evidence. Lots of people reject research evidence (RCTs, in particular, are vehemently challenged by many) as extraneous to our core business in schools, but as the screaming dolls and ‘Scared Straight‘ show us, investing our time and money in ascertaining good evidence of our impact can prove of vital importance.

I heartily recommend you invest in Matthew Syed‘s superb ‘Black Box Thinking: Marginal Gains and the Secrets of High Performance‘. It explores the paradox that we need to be more open to learning from our failures to get better.

Professor Rob Coe‘s paper, ‘Improving Education: A Triumph of Hope Over Experience‘, should be read by every school leader before the year starts. His recommendations are essential reading.