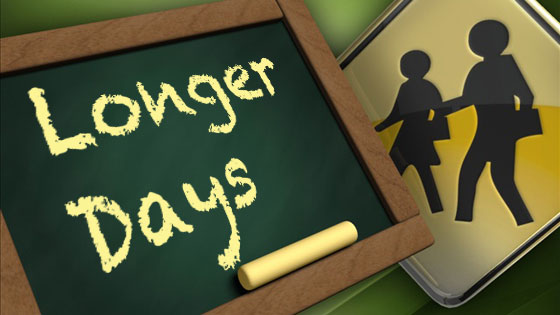 With greater flexibility in setting the structure of the school day, there is a huge variety of practice emerging throughout UK schools. From different models of lesson lengths, to extended school hours, early morning school starts and even late school starts. We also have a plethora of after school programmes and models. Given the evidence, what is the best model to choose? As a school we are evaluating the evidence of best practice. The question arises: should we move to a longer school day?

It does appear that many Academies are moving towards a model of a longer school day. Policy Exchange has written a report for policy makers that makes the broad assumption that the longer school day is in favour politically and they have collated the positive polling in favour of such a move – see here. The international evidence disproves the theory that longer school hours is more effective, but such international comparisons are so broad as to prove very problematic.

Extra ‘intervention’ sessions outside of the school day (mainly held after school):

Clearly, the evidence raises some positive conclusions. It is a case of quality and not quantity. The small effects do draw into question the opportunity/cost of such interventions.

– The Education Endowment Foundation have found that after school programmes have a low impact relative to their high cost (with some interesting caveats to consider) – see here – and do take a look at the useful references.

Blocking during the school day

The best research report has been produced by the IOE – see here. The results are not conclusive in supporting any model of longer blocked lessons. There is some evidence that Science results are better in blocked time, but results for English and Maths are inconclusive.

The effectiveness of the extended school day:

– The Education Endowment Foundation, once again, have found that an extended school day has low impact, but at a moderate expense (albeit from limited evidence) – see here –  and do take a look at the references which unpick much of the evidence.

– A large, and significant study, that analysed the ‘Massachusetts Expanded Learning Time (ELT) Initiative‘ revealed that extended learning time had little to no effect on student achievement outcomes. Related issues, like student and teacher tiredness, were also reported – see pages 20-22 of the report in particular here. Alternatively, a much more positive slant has been put on the same project! Admittedly, it focuses in upon the benefits of extended learning time that embeds other interventions, like continuous professional development for teachers – see here. The benefits to student attainment is made less clear.

Perhaps, given such indeterminate evidence in terms of proving the success of such structural changes, we should, as John Hattie argues, obsess less over school structures, like school days, after school programmes, added interventions, and even school types and instead have a relentless focus upon teacher quality. The evidence would lead us in that direction.

Those particularly enthusiastic about longer school days and extra intervention sessions often cite the difficult, and sometimes chaotic, world of disadvantaged students in particular, which means that school is a haven for them and a significantly better learning environment.There are interesting examples of extended time projects with the explicit intent of supporting students from underprivileged backgrounds in America, shown here in a report by the Wallace Foundation. We can hypothesise whether a longer school days brings diminished cognitive returns, but that would be guesswork. It may be that the benefits beyond student achievement in exams has significant value when it comes to deciding upon a longer school day and that the cited evidence is looking in the wrong places.

It would appear that the drive for longer school days is outpacing the evidence of its efficacy, but I would be very interested in more studies being conducted in Britain in this particular area of research. As the Policy Exchange report cited earlier suggests, many politicians and school leaders are favorably inclined to lengthen the school day regardless of the evidence of its impact.

Of course, our focus should be on enhancing the quality of academic time, rather than necessarily expecting more equals more and extending the school day. Working smarter, not harder.

James Flynn: philosopher who made a major IQ discovery, explained it by a feature of modernity, defended those he disagreed with, championed liberal ideals, dies at 86 https://www.nytimes.com/2021/01/25/science/james-r-flynn-dead.html?smid=tw-share

This is a great way for primary schools in England to learn about how their parents are experiencing remote learning. Sign up now to be part of this study with ⁦@TeacherTapp⁩ & ⁦@EducEndowFoundn⁩ https://teachertapp.co.uk/the-big-lockdown-learning-parent-survey/

This looks interesting on supporting handwriting during home schooling via @NHA_news