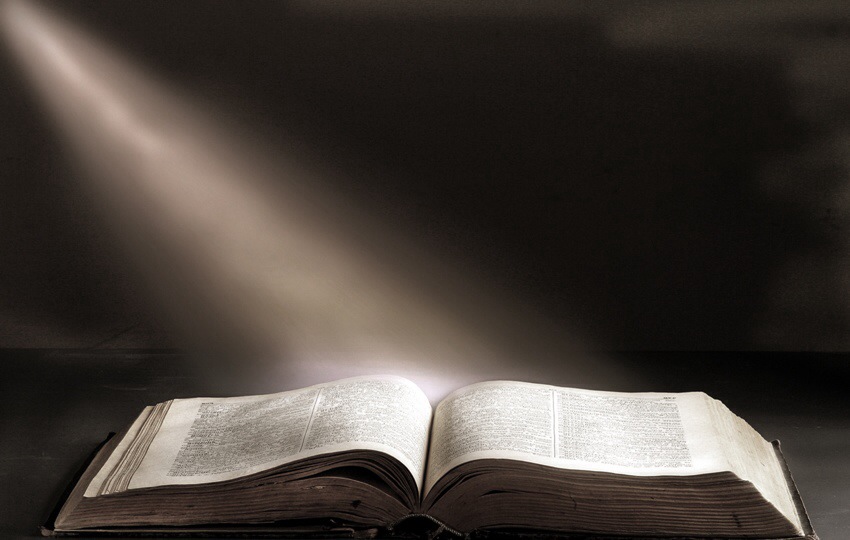 Shining a Light on the Literary Canon

“…the more familiar we become with the nature of these shaping forms and forces lying beneath the surface of stories, pushing them into patterns and directions which are beyond the storyteller’s conscious control, the more we find that we are entering a realm to which recognition of the plots themselves proves only to have been the gateway. We are in fact uncovering nothing less than a kind of hidden, universal language: a nucleus of situations and figures which are the very stuff from which stories are made.”
Christopher Booker, P6 ‘The Seven Basic Plots

Christopher Booker offers up the brilliant hypothesis that there are seven basic plots that underpin our sense of storytelling. This grand unifying narrative is both beguiling and instructive. What if we could find such a universal pattern and base our KS3 curriculum around it? If we were to connect the stories our students know with all the great stories of the literary tradition then we would have ourselves a compelling curriculum.

As luck would have it, we are currently ushering in a new national curriculum.

The bombast in the press is about a return to the past. A rehashing of a 1950s curriculum. Well, perhaps it is – if we wanted it to be. Only looking to the past isn’t a bad thing for an English teacher looking to build a curriculum. Indeed, it is where we should start. But I would start by going much further back than 1950.

The truth is that in our English department we were a little dissatisfied by our current teaching fare, but we just couldn’t put our finger on why. Our 6th form students would take English Language and Literature in large numbers, but they weren’t all widely read, nor were they exhibiting a particular thirst for literature. Controlled assessments can do that to any sane young mind I suppose, but it wasn’t just that. We resolved to invite our English Literature students to the theatre and undertaken wider reading, all in an attempt to furnish them with a better knowledge of the literary canon. We were looking to give them the “universal language” of stories posed by Christopher Booker. A “universal language” far too many of them just didn’t possess.

We were inclined to think that 6th form was too little too late. It made us think about our KS3 and KS4 curriculum. The KS4 is yet to be released and will no doubt be circumscribed by the real pressures of assessment and accountability. The KS3 curriculum, in contrast, offers us a tantalising freedom of choice. After an open and frank discussion we decided that we were going to overhaul our current schemes of learning. Loath though we were to admit it, Michael Gove had a point.

You would be right to question the canonising of literature decided in the gloomy offices of the DfE; however, most English teachers, when pressed, would separate out their Shakespeare from their Danielle Steel, as Gove did when he offered up ‘Middlemarch‘ or ‘Twilight‘ to hypothetical parents. When Gove offers up that the great British literature of Swift, Shelley, Dickens and Hardy should be at the heart of our curriculum I cannot disagree.

His version of British history is a rather grand narrative. I naturally question such grand narratives, as they are too often distorted by the polish of patriotism, but I think for English teachers there is a brilliant story waiting to be told. It is one of a small island whose writers wrote stories that spanned the world and back again in the scope of their greatness.

We should take this latest curriculum as an opportunity to tell it. Of course, we decide how we tell it. Here is an early draft of our prospective KS3 curriculum: 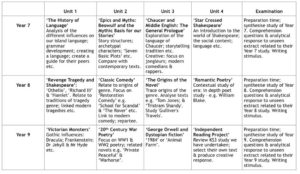 Now, you will be quick to notice the traditional bent of the approach. There is a linear narrative that may appear a lot like the chronological version of British history preferred by Gove and others. A chronological canon. All very traditional.

This approach readily recognises that knowledge of the literary canon is fundamentally empowering. Just as highly functional literacy is equally as empowering. Those adults among us who read texts, newspapers, social media threads, television documentaries, novels and non-fiction with the ease of an expert are all deploying their canonical knowledge instinctively. Of course, we should not deny this opportunity to any of our students,.

I do think ‘how‘ we wish to teach the new national curriculum may differ from the more traditional conceptions likely favoured by the likes of Gove. I subscribe to David Ausubel’s sage advice about teaching, “The most important single factor influencing learning is what a student already knows. Ascertain this and teach him accordingly.” I therefore deem the knowledge of popular culture as having greater value than many traditionalists would credit.

I take the divide between ‘highbrow‘ and ‘lowbrow‘ for what it is – the bastardised language of phrenology – a wholly discredited science that charts bumps in the brain as the key to intelligence! Like phrenology, such a divide is dumb. Instead of the ‘either/or’ thinking of ‘Middlemarch‘ or ‘Twilight‘, we need the ‘and/both’ thinking proposed by the likes of Dylan Wiliam in his ‘Principled Curriculum‘ pamphlet.

The concept of the seven basic plots offers us a rationale for a successful English curriculum because it makes fundamental connections between stories, both ancient and modern. For me it is about creating a narrative order, a chronological story, that helps students see how canonical literature has shaped modern literature and the stories of their multi-media rich world. How can you teach Beowulf without drawing upon a vast array of monsters, ancient and modern? How can you watch Jaws and fail to appreciate the influence of its Anglo-Saxon original? See my post here on teaching Beowulf to SEN students.

We have therefore planned our curriculum to connect the classic with the modern. We begin at each step with the classic touchstones, as they are largely absent from the lives of our students. We therefore need to hook the new knowledge of the traditional canon onto their existing knowledge of film, modern stories etc. We can create a thriving program of homework (I do hate the implications of calling reading ‘work’), whereat they focus on reading as much literature, as modern as they like, as possible. Our stock of modern children’s literature will be read and shared more than ever in a structured fashion. The image of the curriculum content you see above will be richly complemented by a wider reading program that includes a wealth of children’s literature.

Dylan Wiliam was wholly right when he made this statement when outlining his ‘Principled Curriculum‘ pamphlet. We shouldn’t get hung up on the ‘what‘ of the curriculum without a more thoughtful focus on the ‘how‘ of the curriculum.

Matthew Arnold’s conception of teaching the “best of what has been thought and known into the world” requires the best tools of teaching. You can debate all day long the merits of ‘The Hunger Games‘ and ‘1984‘ and which should deserve inclusion on our KS3 curriculum, but a highly skilled teacher can glean the most knowledge for students by harnessing the power of both. Should we start we ‘1984‘? Yes. Should the teacher and the students finish there? No. Can we guide the reading of ‘1984‘ in class, whilst encouraging the reading of ‘The Hunger Games‘ (and watching it of course) as purposeful enrichment. Of course we can.

You can have an ‘intended curriculum‘ of great texts, but primarily what is required is great pedagogy. It is the ‘enacted curriculum‘ that is actually taught at the chalk-face that really matters, a not a prescribed list on a DfE document that is ripe for manipulation.

If we try to transmit the great literature of the canon without meaningful connections to the world of our students and their prior knowledge we are high unlikely to succeed with our aims. Lewis Carroll captured the young mind accurately:

“No, no! The adventures first, explanations take such a dreadful time.”
Lewis Carroll, Alice’s Adventures in Wonderland & Through the Looking-Glass

Yes – they need the historical and contextual knowledge of Victorian society if they are to appreciate with vivid force a Victorian monster, but we are dealing with a tough crowd. On a wet and windy November afternoon my year 8s require some startling adventures before they are ready to attend to the accompanying explanations. If that is a based on powerful images, a film clip or an animation then so be it. Sometimes students need to be lured in before we get them stuck into the hard stuff. To accusations of dumbing down I say ‘pah’! I want them immersed in stories and the explanations will become equally compelling by association.

All this talk of telling stories and finding patterns seems to fit into how the brain of a teenager actually works too. As Daniel Willingham stated, stories are “psychologically privileged” in the human mind. I’m sure Daniel wouldn’t agree with Ken Kesey when he said, “To hell with facts! We need stories!” But I’m sure he would get the thrust of Ken’s idea. Of course, we need not draw a divide – we need both at once.

This sense of coherence can extend to combining English Language and English Literature. Reading and writing combine like a richly complex double helix. This is why we are going to look at teaching grammar with some drilling to establish basic competency, but that in the main we are then going to pursue a ‘grammar for writing‘ approach (see Deborah Myhill’s research). Once more, we are using the central stories of great British literature as our knowledge touchstones, before then making rich connections between grammatical patterns of language employed by writers often with memorable force.

We are going to begin the entire key stage with a historical exploration of language. Students can get lost in the intriguing etymology of words. What better way to get our students to understand grammar than to hack at its roots and investigate? We can get them to take a further step and understand word groups and syntax by creating their own language. If it was good enough for Shakespeare and Lewis Carroll then let’s give it a go. Students can be at once analytical and creative.

In terms of the divide between the analytical and creative, I also see a place for well designed testing in a KS3 curriculum. I have written before about how testing can actually enhance learning here, entitled provocatively ‘Drill Baby Drill’. The power of testing, or my preferred title of ‘retrieval practice‘, need not be demonised: it can encompass quizzes and oral tasks that can make for lively and varied pedagogy. If you have well designed tests (I particularly like these Eton style tests – see here – found and shared kindly by James Theobold). These tests can exist alongside creative outcomes that stimulate the imagination and exhibit knowledge. Once again – it just takes some ‘and/both‘ thinking.

Any curriculum should be rooted by the touchstones of knowledge I have mentioned. In English we have a ready-made bank of great stories from our own island and we should be intent on using it with skill and purpose.

We still have a lot of planning and moulding to do before our schemes emerge into a finished narrative, but we have our universal language of stories to guide us.