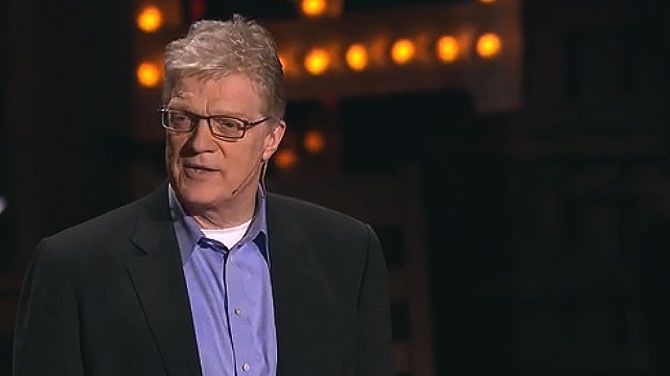 Sir Ken – A knight amongst educationalists the world over.

A couple of weeks ago, like millions of other teaching professionals, I watched the latest iteration of Ken Robinson’s celebration of creativity on TED. It reminded me of the first Sir Ken talk which I had the pleasure of watching in Athens…whilst working! Yes, you heard right – I trained to be an International Baccalaureate teacher in the blazing sun of Athens; watching Sir Ken celebrate creativity in a fan-filled Greek classroom for part of that time (those heady days for comprehensive school teachers are long since gone!). Great work if you can get it!

Perhaps it was the heat of the midday sun, or the heady scent of sun tan lotion, coupled with the wit and charm of Sir Ken, that made me feel like his words were a sort of watershed for me as a teacher, or education the world over.

I was entranced. I felt determined that a whole new paradigm for schooling was required: the ‘factory model’ of schooling was dead. I felt what I was doing in the classroom was hopelessly ill-fitting for the needs of my students. I was enraptured by his stories of creativity and enriching personalisation. I bought the book (his talks usually precede a book – fair enough, I’m sure he has to pay the bills).

I felt myself nodding along with the book, only once I had read it the trance had been broken.

I was looking for something like answers for systematic school change, yet all I found were charming individual examples and beguiling prose. I watched the video once or twice more in various professional scenarios and at home. I still laughed. I was still taken by his persuasive argument, yet I had lost the initial spark – like a drunken first-sight infatuation spoiled by the cruel clarity of daylight. The watershed had become little more than a barely perceptible watermark.

Recently I read this article from a link by Geoff Barton entitled ‘Is This Why TED Talks Seem So Convincing?‘. The article was based on the enlightening scientific evidence that a fluent speaker can acutally fool us into thinking we have learnt more than we actually have in comparison to a less fluent speaker – see here.

It brought all my frustrations with Sir Ken to the surface. His skilful words and rapturous call for change under warm lights and at the beck and call of a willing crowd had wilted. I was left without any real watershed at all. In fact, it wasn’t Sir Ken who was to blame at all – I had been seduced by the cult of personality – by the promise of change led by such a guru and I was culpable for blame. I had forgotten that the reality of education is a more gritty and compromised state of affairs: with politicians, Unions, teachers and the public all vying for their respective interests, often creating a maelstrom of muddled education policy. Compromises, fractured systems and vested interests abound. No call for creativity by Sir Ken would provide a universal panacea to the grey, ambiguous reality of schooling – whether in sunny Athens, the field of dreams that is California or wet and windy England.

Having recently written a well received blog post on teacher explanations – see here – I began to unpick the fact that Sir Ken’s latest speech was another barn-storming performance. But beyond the frilly knickers of the performance we are left searching for the less aesthetically pleasing undergarments that are the practical answers for change. He includes the memorable analogies – Death Valley in bloom. His charming anecdotes and well-timed wit abound. Only this time I was distinctly less enraptured. The Death Valley image was striking, only the analogy was a little more of the same: a pleasing picture but not an answer. Perhaps Sir Ken just takes the beautiful photo to inspire and that we have to go and work the land, toiling to create the conditions for betterment? 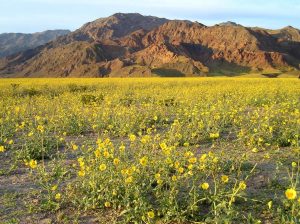 Death Valley in bloom – hopefully not some Hollywood CGI!

On reflection, creativity appears to me a grittier, tougher process than such talks imply. Thousands of hours of ‘deliberate practice’ enable creativity. It is not all ‘flow’ or organic personalisation. For example, repeating the rules of grammar with sometimes deadening repetition can actually create the mastery required for playful creativity and rule breaking. Sir Ken likely scripted and practised his apparently spontaneously witty talk over and over to create his seeming carefree confidence and fluency.

The pleasure of finding ‘flow’ is replaced by the dull but reassuring knowledge that perseverance could help make a difference, in a ‘factory model’ school or not.

Ken is undoubtedly a gifted speaker – like most teachers I can’t help but like him- but my infatuation is sadly over.

I will take his glamorous TED talks with more than a pinch of salt. I won’t look to edu-gurus like Sir Ken to provide watershed moments. I will prioritise the ideas of my peers at the chalkface. I will attend a TeachMeet or two. I will read a blog or three. But I won’t expect a TED talk to change the world.

I will conquer my finite disappointment in finding that Sir Ken’s speeches are nothing like promises and maintain my infinite hope invested in an education system that improves marginally day by day, by gritty perseverance. I will look spend more time looking for answers for teachers by teachers – being healthily wary of the words of eloquent speakers under the glow of cinematic lighting.