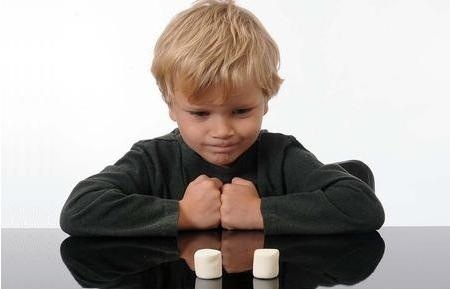 “All our life, so far as it has definite form, is but a mass of habits,” William James

Over the summer I read the excellent book, ‘The Power of Habit‘, by Charles Duhigg – It is a great popular science read, with an interesting array of anecdotes balanced with some interesting neuroscience. As the summer is a time for a well needed wealth of reading to nourish the mind and soul again, I happily moved onto the next book and placed it to the bottom of my virtual bookshelf.

Now, Year 11 mocks have just been undertaken, 6th form groups are in the midst of the winter working lull, and the powerful message of the book came rushing back to my mind. The message of the book is ultimately empowering – put very simply, our brains work by forming habits to save energy and be able to learn new things.

We can master those habits, if we understand how habit forming works. Self-control, resilience, grit – whatever you want to call it – we can master it. What students need is teaching how to go about controlling their habits and developing greater self-control.

How many people reading this blog post would say that you have a strong degree of self-control and mastery over your working habits? Once you have rated yourself, ask yourself: can you resist the ping of your phone, iPad or laptop when you receive an email or a tweet?

Does that subtle daily urge sound familiar? When I spoke to my 6th form A Level Language class last week about their working habits, they universally agreed that they were always engaging with some media based communication – texting, their phone, or Facebook chat etc.; as well as listening to music, and/or television, whilst they attempted to complete their homework. The main reason they worked in their room was to be able to procrastinate in peace, rather than creative a productive cue for a good working habit.

I too know that plight – I struggle with extended periods of marking – but my experience (both emotionally and neurologically) has given me a sense of mastery over my habits. My rewards are tangible and pretty much immediate – from seeing my work impact upon students, to my wage rewarding me roughly when I like (that sounds ridiculously luxurious, but it is roughly true – within reason). Still, many aspects of our careers don’t provide immediate gratification, yet we learn to accept that as part of our maturation.

One example from the book that focuses very well upon the habits and lack of self-control exhibited by our students is also well articulated in this New Yorker article: http://www.newyorker.com/reporting/2009/05/18/090518fa_fact_lehrer.

Essentially, the example provided reveals explicit evidence of the force of rewards in habit forming, as well as the challenge of developing self-control. Interestingly, many KIPP schools in America have undertaken a programme entitled: “Don’t eat the marshmallow!” directly inspired by this very experiment as outlined in the article and in Duhigg’s book. These programmes explicitly teach persistence and habits related to work, including the crucial skill of mastering boredom (a hidden truth of ll up education and our working lives). These skills become integral to the processes of these schools, such is the crucial importance of self-mastery for their students. Yet, productive habit forming, resilience and self-control should be at the core of every school, rooted in what we teach and how students learn.

“I must fully engage in self-mastery here”

Whilst not offering some pat life solutions to all our ills, the book unveils some of the processes behind habits the can make habit forming something we can act upon, helping in the attempt to change bad habits where necessary. This diagram is a simple version of the key process of habit forming: 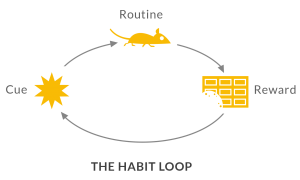 This relatively simple process is something we should explicitly teach and students, and even their parents, if we are going to maximise learning opportunities like homework. With my A Level students I discussed how they must start treating 6th form like work, like a job.

Not all reception of knowledge is interesting, spell binging or emotionally significant – some of it is terribly dull…but we must help them master this need for instant gratification. Maybe the instant feedback provided by levels on a computer game, or playing a football match, is tough competition, but we must wage the good fight.

Having talked to the aforementioned A Level group, it came to light many had part time jobs, from painting to working in McDonalds. Some of those very students who admitted regularly being late to 6th form in the morning, but they had never been late for work! They explained how they worked solidly in their part-time job, such as painting for an our or two, with little thought to doing otherwise, but then they couldn’t work for a fifteen minute stretch on their homework. They just couldn’t see the value in doing it – tasks that required extra effort, like the effort needed to proof read their writing gave them no reward – it bore no relation to future success for them.

This perennial problem of self-mastery, particularly over the ever-changing fertile teenage neurological system, is nothing new, but we must explicitly do our best to teach habits of mind. I explained my ‘cue’ habit at home of making some coffee before I began my school work; my subsequent reward of a second cup and a biscuit after forty five minutes. I admitted I sometimes failed to leave my phone and iPad from distracting me, but that I was intent on changing that habit…we are always a work in progress!

One important point from the book was this about how to shift a habit:

“Rather, to change a habit, you must keep the old cue, and deliver the old reward, but insert a new routine.”
(Excerpt From: Duhigg, Charles. “The Power of Habit: Why We Do What We Do in Life and Business.” Random House Digital.)

Now, this really is crucial in persisting with changing the working habits of students. We must first work upon old cues (like a cigarettes smoker would use nicotine patches). Perhaps the old cue is to go to their room; the old reward is some time on Facebook or FIFA – but the new routine would include switching off their computer and phone, perhaps instead playing some music (they could play different genres or bands for their different subject work to add a further memory cue), before creating a new reward themselves – such as after half and hour, giving themselves a small treat and a technological interlude for five mins.

After a further hour they then reward themselves with a ten minute break and another small reward. Repeat…repeat….repeat. Build their resilience – develop the muscle that is their brain – resist eating the symbolic marshmallow!

Another key aspect to changing habits is for students to have a strong sense of long term rewards and, crucially, to be able to visualise those rewards and make them feel almost real on a daily basis. One great anecdote from the book is how the greatest ever swimmer, Michael Phelps, went from a impulsive and compulsive teen to a driven, focused athlete. His coach taught Michael to visualise the perfect race (typical in sporting psychology), which he termed mentally ‘putting in the video’ [the video of the perfect race]. Every morning and night he would be encouraged to visualise the perfect race, imitating this process when he competed in the pool. His near-absolute focus on success made him drive towards that ultimate goal of perfection – other factors no doubt helped, but forming strong working habits were key.

So many students who under-perform in school simply don’t have any career aspirations – this happens year on year. Too often, if they do not have aspirations, no school work will feel like it offers a real reward to them and they cannot get an intrinsic reward from the effort either. Some don’t have parental role models that can articulate the link between academic and career success. We must endeavour to make these long term rewards feel real by ensuring they have a vision for their own future success.

Making their future career feel real can encompass many things. It could mean creating a curriculum that embraces project based learning, with a real audience – audiences which often touch their real career aspirations. It may involve having an ‘enterprise’ programme that is driven thought the core of the school, across and through the curriculum, not as some token tick box.

It may involve maintaining a brilliant Careers department (at a time when such support is being stupidly and ruthlessly cut). This aspiration must start considerably earlier than when we typically intervene – ‘careers‘ should not be something we leave until GCSE – it should be embedded deeply from Primary school. I am not proposing some utilitarian nightmare of fake form filling and imitative role-play from Year Three, but we must change the curriculum in a way that reaches out to parents to raise aspiration; that creates a school that is masterfully enterprising – that forms working habits for learning and life. Richard Gerver is rightly heralded for creating such a school, where enterprise is real and meaningful, here at Grange Primary School:

In every job there is an element of fun (so says Mary Poppins), but there is also an element of boredom. As much as we should help students engage in compelling real life learning, akin to the evidence form Richard Gerver’s school, we must also educate children that self-mastery includes living and working in a state of boredom.

Successful people manage to not eat the marshmallow – they manage to maintain their efforts through the tedium and the drudgery. They must embrace the boredom on the path to future success – they must constantly be encouraged to keep their eye on their deferred rewards, however far away they might appear to be.

I spoke to my A Level students about the fact that they may be being paid for their painting and decorating at the end of the month, or even cash in hand; but with success in 6th form, they are dictating how much they are likely to be paid for the rest of their lives! Yes, they gain many more intrinsic value from learning that cannot and should not be measured monetarily, but we should not divorce the two.They must start the difficult process of habit changing by being given knowledge about the process of habit forming. That is the first step on the path to self-mastery – put simply, don’t eat the marshmallow!

NOTE: if you are now off to go to the cupboard for chocolate, or even some marshmallows, you have completely failed the hidden challenge I have set questioning the power of your self-mastery!